In my previous Throwback Thursday post, I told you about my first experience of demonstrating Accordance at the 1995 Annual Meeting of the Society of Biblical Literature. We were offering attendees a sneak peek at Accordance 2.0, which was released the following April. I spent most of 1996 preparing modules for the initial release of Accordance 2.0, as well as for our first CD-ROM release later that same year. Little did I realize it at the time, but my next project would prove to be a major turning point in the development of Accordance tools.

Early in 1997, I was given an e-text of Anchor Bible Dictionary and told to prepare a prototype module for Accordance. Compared to the previous tool modules we had released, Anchor presented a significant increase in complexity, with a wide variety of hypertext links, images, tables, transliteration, etc. Each time I would run across a new aspect of Anchor which our current tool implementation could not support, we would have to do programming to support it. Many of the cool features in Accordance tools today are the direct result of our early efforts to support Anchor.

The time I spent developing Anchor was risky, because at that point we did not have a signed contract with the publisher. At that time, Anchor was published by Doubleday, and while Doubleday was open to working with us, we were still a relative newcomer in the Bible software market. We therefore needed to "sell" Doubelday on our ability to represent Anchor Bible Dictionary well, and the best way to do that was to show them how it would function as an Accordance tool. The risk to us was that if they ultimately decided not to license Anchor to us, a lot of work would have been wasted. 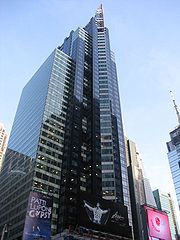 Some time around the summer of 1997, we made a trip up to New York City to meet with Doubleday and show them our sample module. This was my first trip to New York, and I remember being surprised that Doubleday was housed in a huge building right off Times Square. After ascending to whichever ridiculously high story of the building our meeting was in, we were ushered into a waiting room, where I began to get nervous about the prospect of demonstrating Accordance to a couple of publishing executives.

As it turned out, the demo wasn't the hard part. They made a few suggestions for additional minor features, but they were generally very impressed with our implementation. Much more difficult were all the questions they had about the size of the Macintosh market, the size of our user base, how we would market the product, etc. Prior to the meeting, I had made a few fumbling attempts at market research, but I certainly didn't have a lot of hard statistics I could rattle off. I realized half-way through all this that I was basically being asked to sell the viability of the Macintosh platform.

On the other hand, the only reason Doubleday was even considering working with us was because Accordance was Mac-only. They had already licensed Anchor to one Windows developer, and they had no desire to work with any competing Bible software programs. Because we served a different computer platform, they were willing to consider licensing to us as well.

Though our meeting with Doubleday went well, it was some time before the contract for Anchor was finalized, so I had to shelve a partially developed module and move on to other projects. When we finally did get the go-ahead to produce an Accordance version of Anchor, I had to pick up where I had left off and then hurry to get it done. Anchor Bible Dictionary was finally released in the Fall of 1999—I believe in conjunction with Accordance 3.6 or 4.0.

Looking back, Anchor was well worth the risks we took, the time we invested, and even the long wait for the contract to be finalized. In the short term, the work we did in developing Anchor laid the groundwork for many of the improvements in Accordance 3.0, and we were now able to support other resources with complex hyperlinks, tables, and images. When Anchor was finally released, Doubleday was very happy with the finished product, and we enjoyed an excellent working relationship with them over the years. That relationship ended up giving us added credibility with other publishers, so that they were much easier to sell on the advantages of working with Accordance. Likewise, having Anchor Bible Dictionary gave us credibility with users. For years we had customers drawn to Accordance because we offered Anchor where most other programs did not. In addition to all those benefits, the information in Anchor was of invaluable help to us when we developed other products such as our own Atlas, Timeline, and Bible Lands PhotoGuide.

All in all, landing Anchor Bible Dictionary turned out to be a significant factor in the growth and development of Accordance. Today, Yale University has since acquired the Anchor brand, and we are very excited to be able to offer the Anchor Bible commentary series in addition to the dictionary.

What about you? What has having Anchor Bible Dictionary in Accordance meant for you in your own study and research? Let us know in the comments on this post.